Game developers have lots of ideas. Some actually get made into released products, but most never make it past prototyping or even past just being idea. Nevertheless, it’s always good to constantly come up with ideas and store them for the future. So today I wanted to talk about some of the past game ideas I’ve had and how far I got with them. Some I’ve started working on and others I want to work on in the future. 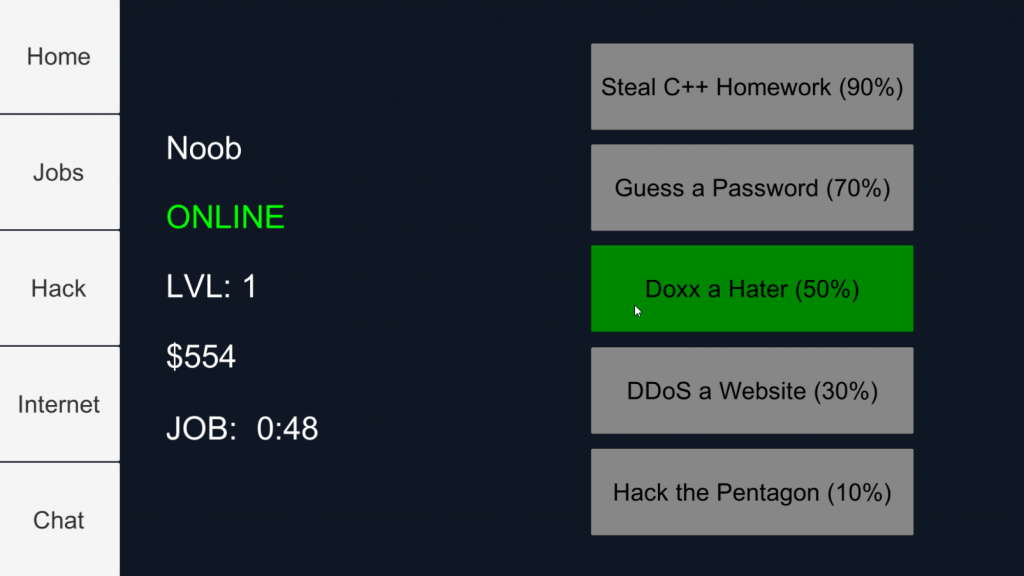 My attempt at remaking in Unity a game I used to love when I was in college called Hacker Forever. It was a great text-based browser PvP hacking game that had clans and time-based PC and Server attacks and a dedicated community. You were able to have fun hacking each other and planning attacks to make your clan the best one.

It was really addicting to me and I stayed up a lot of nights playing it. The game was great until the dev started pushing out updates that ruined a lot of the PvP fun that made it great and everyone that played it left. Now it’s just a friendly solo grinder/clicker but in a text-based game…so it’s boring.

The game has been pretty easy to recreate in Unity so far and I hope to work with some of the old players of the original game to make it cool and improve it vastly to make a cool PvP hacking game again. Even give it mobile ports too. I’ve been working on this more lately, but just prototyping it so far. Nothing visual or online yet.

A comedy 3D platformer inspired by Jak & Daxter and made in the Unreal Engine. It’s about a redneck weeb that tries to save his town and favorite idol from an alien invasion.

I learned about combat animation transitions and pickup item mechanics in UE4 working on this so far. I haven’t worked on this more beyond that because I wanted to have more experience in UE4 and work on smaller games in general first.

The scope for it was way too big for me right now so I’ll just leave that for later.

A text-based command prompt horror game I started during a gamejam where the player is at a terminal exploring the files to beat an old game like Zork but then weird stuff happens with the files and it becomes a horror game.

Hard to describe I guess but it was supposed to make the player think it was some old relaxing treasure finding file explorer game but ends up becoming a freaky text-based horror game with chilling sudden graphical glitches and weird sound effects sometimes.

I implemented some text-based commands, log messages, and a system that would recreate a directory/folder structure into the game as game objects. Basically I could design all the files and directories outside of the game and the game would recursively go through them and remake them into the game.

I got too busy during the gamejam to finish it and then I just haven’t worked on it since. It’s still something I’d like to go back to at some point, but I’d really need to plan it out more. 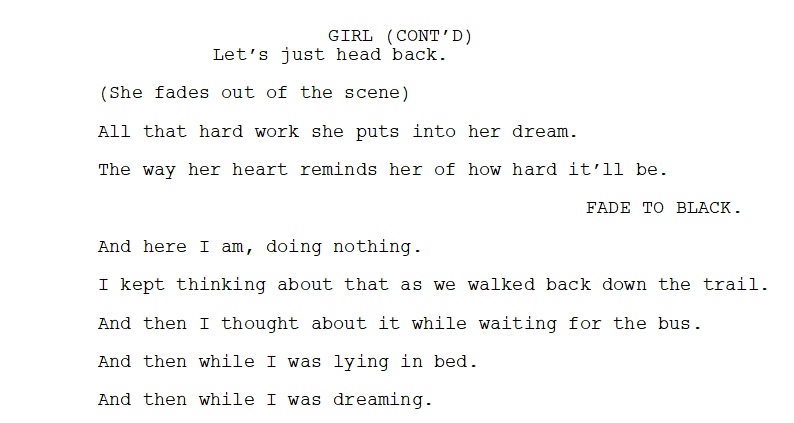 A short, sad visual novel about an amateur actress trying to get her start and a guy who isn’t doing anything in his life. He doesn’t have plans while she’s dreaming of stardom, until her life is brought into turmoil and she feels her dreams slipping away.

It isn’t supposed to be a romance, it’s a story about trying to keep going for your goals while you can before your time runs out. It’s really sad and serious, much different from Rapid Tap, and gives me a chance to try writing my own serious visual novel.

I nearly finished the first draft of the script for it (you can see an except above). This is actually the visual novel I talked about in my last devlog. As I explained there, I put it on hold because it doesn’t have any elements that make it a game. It’s just a kinetic novel where I wanted to hire artists and musicians to make some really beautiful assets to tell this story. But I want my next release to feel more like a game. 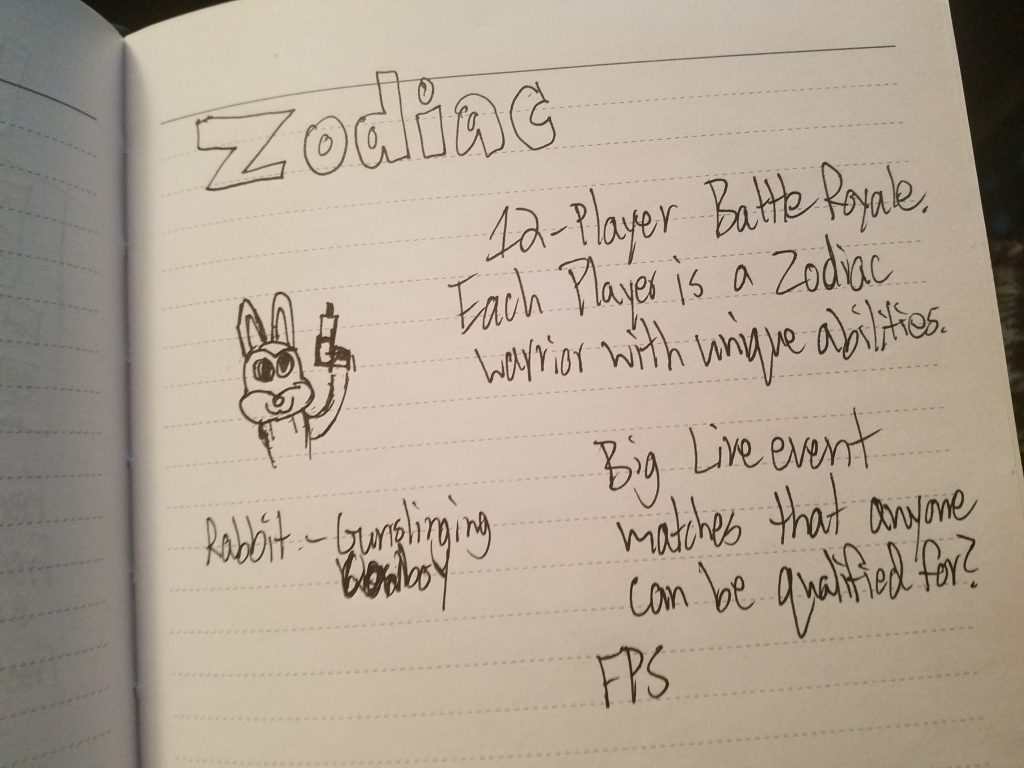 (Yes, I do have a physical game dev journal. Yes, my handwriting is atrocious. Yes my little doodles in it all suck. And yes, I don’t fill it in as much as I probably should.)

A 12 player battle royale where each player is a different hero representing the 12 Chinese zodiacs. There’s only one of each hero in the match and players could be assigned them at random maybe.

Inspired by the anime Juni Taisen. I also came up with it at the time where all battle royales were just 100 players and I wanted a smaller scale BR. Then I played Darwin Project, a 10 player BR, and it’s really cool but I still like the idea of a hero-based BR.

And that’s all for now. I still have a lot more ideas I want to talk about, and I come up with more ideas daily. Maybe one day all these projects will be made reality, either by me or someone else. Until next time!